Cincinnati was rocked by a free love scandal in 1908

S.Candals in Cincinnati come in a huge variety, from sex and politics to greed and scientific discovery. Philosophical scandals are rare here, so it came as a surprise when Henry Heath Bawden was fired from the University of Cincinnati in 1908 for contemplating the sanctity of marriage.

Professor Henry Heath Bawden is photographed on the steps of UC’s McMicken Hall.

Bawden came to UC in 1907 as a professor of philosophy. It was, in fact, the entire Faculty of Arts. The UC’s College of Liberal Arts had only 27 faculties at the time, and Bawden was the only one teaching philosophy to come to Cincinnati from an endowed professorship at Vassar. During six years at this elite school, he proved so popular that the students dedicated the 1906 yearbook to him. He and his wife were both from Ohio and had families here, so no one wondered why he should give up a prestigious position at one of the Seven Sisters – women’s colleges equivalent to the Ivy League – to teach at a small, urban college in the hinterland.

After all, Bawden was a dedicated lecturer, useful mentor, and creative thinker. He wrote the standard introductory text for an emerging school of American philosophy known as pragmatism. He didn’t think much of marriage either, and insisted on discussing his dislike.

One day in May 1908, Bawden’s philosophy caught up with him when Mrs. Bawden, former Susan Talbot of Granville, Ohio, sat down for a conversation with UC President Charles Dabney. Why Mrs. Bawden met Dabney remains a mystery. Several motivations were suggested at the time:

The “unusual living conditions” were these: The Bawdens lived in the Auburn Hotel on Malvern Place in Mt. Auburn. Mrs. Bawden and the couple’s two sons lived in a suite in the main hotel, while Professor Bawden lived in the annex across the street.

Everyone agreed that, apart from his indiscreet declarations of love, Professor Bawden had neither fulfilled his philosophical longings, nor had he represented his radical convictions in the classroom. However, his philosophy prevented him from teaching in the presence of impressionable young minds, especially those of the fairer sex, according to President Dabney, who told the Cincinnati Commercial Tribune [May 12, 1908]:

“Nobody whose opinions or way of life destroy the foundations of human society are allowed to teach in any institution for which I am responsible.”

When the scandal broke out, Bawden had two weeks left on his apprenticeship contract. UC decided that any student who refused to attend the remainder of Bawden’s classes would be counted as “in attendance” and that women would not be allowed to attend his class without notice from their parents.

What were these dangerous beliefs of Henry Heath Bawden? As he himself summed it up in a The Cincinnati Times star’s manifesto:

“Fellowship, companionship is the only foundation of true marriage, and when this has disappeared for some reason, the real immorality is to maintain the outward form when the inner essence has fled.”

The university and the local media interpreted this statement as promoting free love, sexual freedom and the abolition of marriage. This is The Enquirer’s [May 12, 1908] to take:

“Prof. Bawden’s views are unique, but not new. He sticks to the creed of the ‘freethinkers’. As for marriage, he considers it a good institution only insofar as it cares for the offspring of the sex relationship. Man and woman should only live as comrades – with comradeship only as a tie. “

And here is an excerpt from a Cincinnati Post [May 13, 1908] Editorial staff:

“And when a college professor announces that his belief is NOT in marriage as a safety valve for all of society – its blessing and protection at the same time – but in an ‘affinity’ type of love, his day of usefulness as an educator has passed . “

As a reminder, Bawden wrote some passionate words to a Vassar student that apparently never got delivered. It is possible – none of the media reports suggest this – that he expressed his wishes in any other way. Everyone agreed that Bawden never really had sexual relations with anyone other than his wife. His students insist that he never spoke about his views on marriage in class. In short, Professor Bawden was fired because of his scandalous but very personal beliefs. 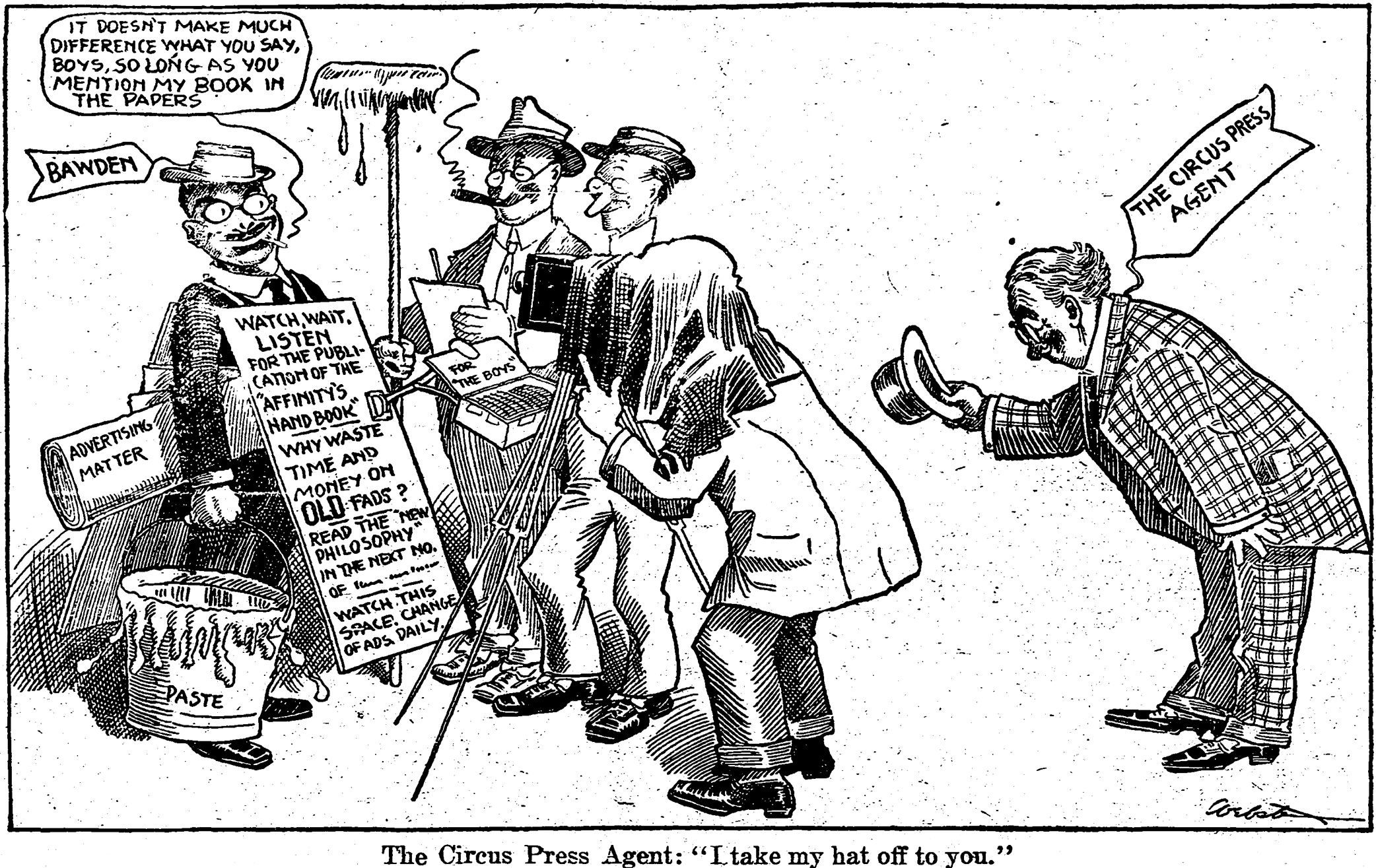 Professor Henry Heath Bawden conscientiously referred to his three unpublished manuscripts in every interview regarding his discharge from the faculty of UC. Local newspapers berated him for shameless self-promotion at the expense of his publicly humiliated wife.

Bawden told the inquisitive that if they really wanted to know what he was thinking, he would be ready to publish four books: one on pragmatism, one on education, and one on aesthetics, as well as a volume of his love poems. The newspapers have toasted him for this shameless self-promotion.

The Enquirer printed more unsubstantiated rumors than the other local newspapers, claiming that Bawden’s Vassar inamorata had fled Poughkeepsie, NY and is now living in California. Bawden ended up there after his release from the UC.

Mrs. Bawden took the children and moved in with Professor Bawden’s parents. She divorced her stubborn philosopher in 1909, never married again and lived until 1953. Both sons received their doctorates and became professors.

Bawden’s book on pragmatism was published in 1910 and is still considered a classic, although pragmatism has long since been superseded by other schools of thought. When his book came out, Bawden was living as Henry H. Bawden and working as a truck builder in San Ysidro, California. Over the next 40 years he built a new reputation as a pioneer in organic farming.

During his time in California, Bawden lived with a woman for a while, was sued for seducing a married woman to live with him, and got married and divorced another woman. Not a word about whether he has found his true comrade.

None of his other books were ever printed. Bawden died in 1950 and is buried in San Diego.

# 8 Cincinnati is aiming for its 15th straight win against Miami, OH

Comment: This is the most embarrassing Cincinnati City Hall episode ever